What the heck is that "

" all over the main index page?

The yellow part is the unsung symbol of Starfleet. In the Original Series, you could find it on the secondary hull and warp nacelles of the Enterprise (as part of the rusty red stripe), on shuttlecraft, in the offices of Admirals ("Trouble with Tribbles"[TOS]), and in fleet courtrooms ("Court-Martial"[TOS]). 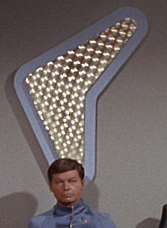 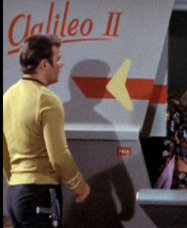 Unfortunately it became forgotten to many, since it was not included in the official history of the Star Trek Chronology and is not included in the Encyclopedia. I used it both because I needed some sort of pointy-outy-thingy, and because it's a symbol deserving of more respect.

Though the symbol appeared in either direction on vessel hulls, it generally did seem to 'point' to the left on the port side of vessels and on walls.   However, since it pointed the other way on the starboard side of ships, I took the liberty of using it that way.  Further, the version as seen above features highly-rounded endcaps which I was unaware of when I first attempted to recreate the symbol for the website.  My version was based on a tiny .jpg of some replacement decals for the old AMT model of the 1701.   Thus, back in November 2002, I fiddled around and finally ended up with the somewhat more angular, upturned version of the symbol seen all over the site.

And here we come to the interesting part.   In March 2005, I saw that one of the final episodes of Star Trek: Enterprise would feature the USS Defiant from "The Tholian Web"[TOS3].   Though I didn't see it at first, I audibly gasped when I finally saw something in the spoiler images posted by The Great Link: 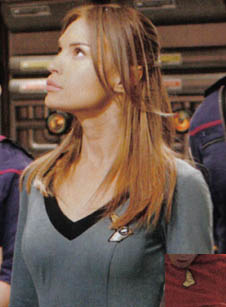 Looks familiar, doesn't it?   On the left you have the USS Defiant symbol . . . on the right you have one of the early mid-sized versions of the fleet jpeg from November 2002.  They bear the same basic proportions and angles.

I figured it had to be mere coincidence, albeit a highly cool one . . . after all, the little chevron does look better with angles, and not quite so much like a pregnant banana.    But, there's a little more to it than mere coincidence.  Reports suggest that as far back as Franz Joseph's Star Fleet Technical Manual from 1975, fans were rendering the little chevron in an angular manner.   When the symbol was brought up to Mike Okuda, he replied:

Drats.  And here I thought I'd been original in the matter, with my good taste confirmed three years later by the Trek art department.   Nonetheless, I'm still quite pleased to see the site symbol appearing in the canon (associated with a ship named Defiant no less), not to mention the tip of the hat to 1970's-era fandom now that Trek is facing a second slumber.

In any event, besides the standard article tag

, and the guest author article tag

.   For kicks, I even made one for the Battle of Britain index

Then, of course, there are the page title marks.  The first below is just a standard "pretty" for the page titles, the second is for guest article pages, and the third is for Battle of Britain pages.  Others appear throughout the site, and eventually I'll make a more complete listing.

Special thanks to "AndrewR" of Flare for the "Court Martial" screencap