Scrutiny of the canon shows that there is a most peculiar disappearing effect associated with the destruction events mentioned above, which invariably occurs within a frame or less of the emergence of planar effects.  The series of animations below helps to show this disappearance effect:

As you can see, each of the events above appears to feature large hull sections simply disappearing completely.   This is most readily visible in the DS2 animation (where the effect was first noticed), but is also present in each of the others.

In the case of the Rebel Wingless, it may not seem to be readily apparent.  After all, there is a huge fireball involved, one which could be thought to be obscuring the ship, causing its seeming disappearance.  However, that is not the case.  Let's look again at the first three frames of the ship's explosion:

In the shots above, you can see that to the left of the Falcon's cockpit, there is a distant Y-Wing which appears to be headed directly for the camera, appearing as little more than three connected dots.  If you look below that Y-Wing in the latter two shots, you can see a shape which looks like letter H laying on its side, with additional darkness below it.  The area appears in the zoomed and cropped image below: 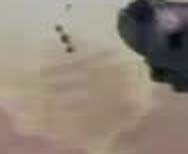 It is even more visible in later frames:

This may appear, at first, to be a mere fireball.  However, this researcher noted that he'd seen this shape before in relation to Endor.  It appears here, just to the right of the largest visible Calamari cruiser:

Below, I present two overlays.   The left is a simple partial-transparency overlay.  The one on the right made use of a contrast-enhanced version of the H shape in the Wingless scene, so as to better draw out the basic shape for overlay purposes: 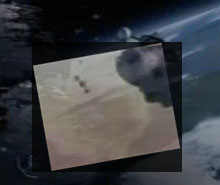 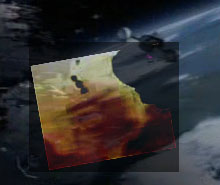 As you can see, it is a perfect match.

(Indeed, the H feature is even more clearly visible in the final fireball shot above.  In any case, the H feature seems to be a constant part of Endor's atmosphere, given that it is also seen days earlier when the Rebels first arrive.  (Even those who would wish to dispute the time conclusions on that page must, due to the dark night seen on Endor, accept that the cloud pattern was present for at least a full day.))

What this all means in reference to the Wingless shot is that the yellow fireball is not actually a yellow fireball, but something else (perhaps another 'layer' or zone of the planar orange cloud (discussed in Section III.C)).   Further, since we can see through that yellow cloud and observe the surface beyond, it is apparent that the ship is no longer present.  It is also worth noting that the yellow cloud does not appear (or at the very least, is not distinct from the orange cloud) until the same frame as the ship's disappearance.

What seems to occur is that the superlaser strikes the small Rebel ship, producing a strange effect that is roughly planar, but sufficiently thick to obscure the vessel and allow us to see only an outline of it in the midst of the orange cloud.  The thinner orange cloud regions (both the higher velocity and lower velocity layers or zones) are probably not as thick, and extend further.  After being able to see the outline of the vessel in the first frame of its destruction, the vessel then promptly disappears completely, replaced by a mostly-transparent yellow cloud, allowing us to see the cloud patterns of Endor beyond.

As noted in Section II.C, despite the many various obscuring errata that render the surface of Alderaan hard to see after the superlaser hits, it is possible to observe an area of outwardly displaced surface near the poles.  Let's observe what happens to this area around the time of the secondary blast:

2.  The region is still visible, though it is obscured a bit more.  The apparent split seems more noticable.

3.  The region now looks like it has four distinct sections, two more splits in addition to the one noted above, though the sections still roughly follow the curvature of the planet.

4.  The distinct sections are barely visible.  Meanwhile, the secondary blast is well on its way.

6.  The surface is no longer visible, in sections or otherwise.  The second ring emerges at the same time.  Debris chunks appear shortly thereafter.

So what happened?  Well, take a look at this:

Watch carefully . . . the glowing curve of the displaced surface moves downward.   In other words, the expanded surface collapses.

(For a non-dithered view, download the following.  Set your player to repeat/loop.

This may mean that the disappearances may all be some sort of rapid compression or implosion event, and/or that there was a "normal" (i.e. hull-esque) material disappearance beneath the remaining surface of Alderaan.

"Theoretically, no weapon could penetrate the exceptionally dense stone of the ancient temple, but Luke had seen the shattered remains of Alderaan and knew that for those in the incredible battle station the entire moon would present simply another abstract problem in mass-energy conversion" (ANH novelization, chapter 11, italics mine)

Above, the mechanism of the superlaser is described, albeit in a rather general sense.  Mass-energy conversion can take many forms, of course, from combustion to fusion to matter/antimatter annihilation.  However, given that planets are generally neither combustible nor ready to explode in a fusion or M/AM reaction, this does imply something more exotic for the method the superlaser employs.  With combustion well out of the picture, the quote suggests that in some way the superlaser causes the mass of the planet to contribute to its own rapid, violent disassembly.

Others have argued against that notion as being part of the quote.

One argument suggests that the quote was in some way referring to the power generation systems of the Death Star.  This makes little sense.  The context is weapons and destruction, not engineering and power generation.  This would be like pondering a battleship's imminent attack and saying "theoretically, no shell could penetrate the thick wall of the little bunker on the beach, but the crewman had seen the shattered island of Alderaan and knew that for those on the battleship, the entire beach would present simply another abstract problem in boiler technology."   As you can see, the sudden contextual leap to power generation technology is rather jarring, given that the entire quote is about weapons.

Another argument suggests that Luke is not qualified to think about the superphysics of the Death Star, being a mere 'idiot farmboy' . . . the fact that he was doing so according to the novel notwithstanding.  However, Luke was a farmboy with galactic aspirations, and by this point Luke had signed on to fight with the Rebels.  These, of course, are the very same Rebels who knew about the Death Star's construction, managed to gain a copy of the plans for it, had an idea of how powerful the Death Star's weaponry was (even "more powerful than anyone suspected", says Leia in the novel), and even as Luke pondered the situation in the quote above, the plans contained in R2 . . . hours of data with "diagrams, charts, statistics" . . .  were being analyzed.  Last but not least, information about the Death Star was well-circulated, as per Dodonna's comment that all of the Rebels had heard of the battlestation coming for them.  (Besides, Luke had to have learned or known about the dense stone of the temple.  That's not the sort of thing a simple 'idiot farmboy' would just be able to guess about, either, or be expected to research on his own.  Either he was bright enough to know, or he was told . . . as with the superlaser.)

Supporting Luke's rumination that mass-energy conversion is part of the superlaser's mechanism, there is the following quote from the novelization, regarding Vader's thoughts while looking at a map of the Empire:

"It would take a microbreakdown of a portion of this map to reveal a slight reduction in spatial mass, caused by the disappearance of Alderaan."  (ANH novelization, chapter 8)

Granted, even a burning candle involves a reduction in the amount of matter in the universe, but in concert with Luke's observation this comment is quite telling.

Given that there is a great deal of solid debris left over from Alderaan's destruction, it is apparent that any mass-energy conversion which took place did not totally consume the planet.

An interesting exchange takes place in the NPR Radio Drama of ANH:

Though the utility of this statement is questionable and thus, for our purposes, negligible, it is an interesting statement nevertheless.  Generally speaking, one would only expect such a statement to be made in regards to a chain reaction of some sort, such as might occur with nuclear chain reactions or even conventional explosives.

Back to the Superlaser Effect Index

Back to the Death Star Research Project Index