Phasers of the TNG Era

The Type I phasers of the 2360's and 70's are similar in output and basic characteristics to the Phaser One weapons of a century prior, though somewhat smaller and sleeker.  Below, we see Riker's test firing of his hand phaser in "Hide and Q"[TNG1].

As you can see in the images above, between one-third and one-half of a cubic meter of rock was blown to dust and debris by the tiny phaser, and the rest of the rock appears to be quite dissatisfied with its continued existence.  Unfortunately, it's impossible to tell how much material was vaporized, but we can make some guesses.

First, let's assume that the rock is a silicate of density 2,000 kg/mł, and that .3mł of the rock is gone after the blast (i.e. less than a third of a cubic meter, which would make Worf really short . . . but we're underestimating here.)  That would mean that some 600 kilograms of rock had been rendered absent.  If just one percent of that was melted, not even vaporized, then the tiny phaser's effective yield was at least 5,751,000J, or 5.75 megajoules.  The shot lasted less than one second.

Off-axis firing has been observed in these hand phaser models, as well, as seen in the image below (also from "Hide and Q").   The units have not been observed to fire wider beams, though it is logical to presume that they can assuming standard phaser capabilities and given the wide, flat beam emitter. 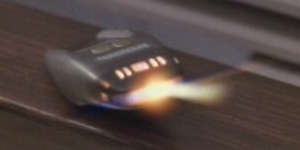 They can be quickly set to fire an automatic firing pattern, as observed above when Wes used the technique in "The Game"[TNG5].  The weapon fired numerous short bursts over the course of almost a minute, presumably at a relatively high power level to overcome the forcefield which was the target.

It isn't clear why the weapons, standard issue in the early-to-mid 2360's, fell out of favor in the latter part of the decade.   They were readily concealed and capable of being aimed surprisingly well.   Power was no problem . . . the phasers were fully capable of vaporizing humanoids, as seen in "Up the Long Ladder"[TNG2].   In short, the weapons seem a perfect choice not only for most missions, but as a default sidearm.   Standard uniforms of the early 2360's even had a built-in holster for the weapon, used as a simple pocket in "Measure of a Man"[TNG2]: 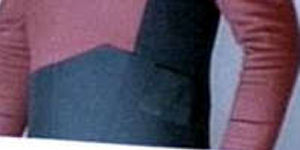 There were several occasions where someone produced a phaser seemingly out of nowhere, including numerous examples from Yar, as well as Picard in "The Battle"[TNG1].  As normally holstered, however, the weapons were visible . . . though only as a small light-colored sliver of silver.

Despite its absence the Type I is still available for use, though it is commonly only employed as a concealed weapon.  The last few times it has appeared have been "The Mind's Eye"[TNG4] and "The Game"[TNG5], with a surprise appearance seven years later in 2375's "In the Flesh"[VOY5], in which it was canonically identified as a Type I. 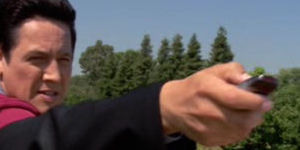 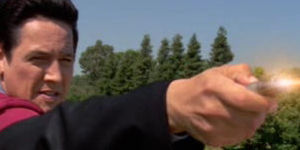 From the many various forms of pistol seen from 2254 to 2344, and on to the non-pistols of the TNG era, the larger handheld phasers have probably undergone the most radical design changes over the years.

In the early 2360's, these phasers had developed into a large, rather bulky unit, undoubtedly driving some toward the smaller Type I.   It was in the mid-2360's that a smaller Phaser Two appeared, which may have made the Type I seem like the less powerful, less attractive, and unnecessarily tiny choice. 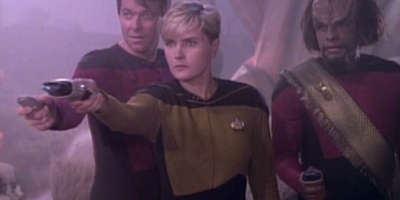 Quite long, quite wide, and quite flat, these Type II weapons of the early 2360's were almost certainly equal or greater in volume to the older pistols.  The forward section was very wide, with the beam emerging from a wide oval area in the front.  Below, we see various views of the weapon, along with a rough size comparison to the smaller Type I.   Note in the shot of Riker and Yar how long the handle is on Riker's holstered weapon, and how much still remains based on Yar's.   One can certainly see why a smaller phaser might be desired. 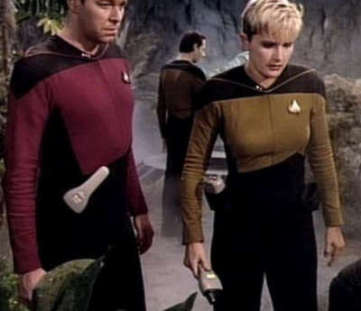 The weapons have been seen to employ off-axis firing ability, as can be observed in the shot below from "Skin Of Evil"[TNG1].  Despite the atrocious aim, both shots did hit their target.

Note also the off-axis shots from these scenes from "Datalore" and "The Arsenal Of Freedom"[TNG1]: 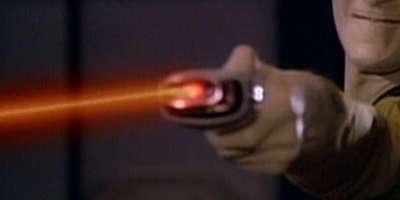 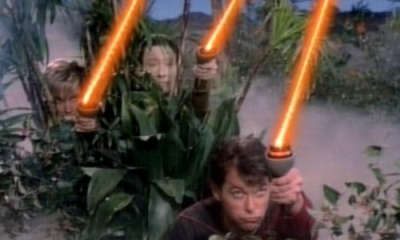 The shot above also shows sideways off-axis firing (note Riker's phaser especially, though Yar's also shows the effect), whereas the other shots may not be clear on the point.

This model of phaser put out a more intense and thicker beam at higher power levels . . . in the pictures above, you can see quite clearly that the "Datalore" beam is less intense and less thick than in most of the other shots.   The images below show two shots of Worf attempting to cut a hole in an impenetrable alien material in "The Royale"[TNG2].  For his second shot he adjusted the phaser to a higher setting, and the higher setting is obvious: 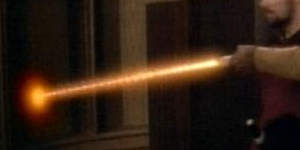 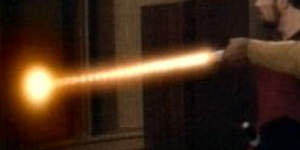 The "Datalore" shot, despite its evident weakness compared to other shots, is nevertheless the source of the following rather unpleasant hit on Dr. Crusher: 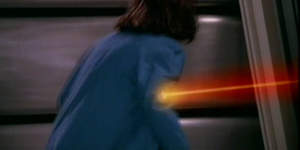 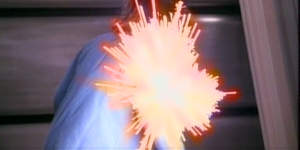 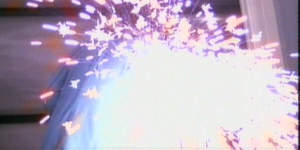 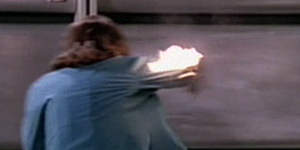 Widebeam shots have also been observed.  In the below from "Arsenal...", Data attempts to bring down a forcefield encasing Riker.  Note the intensity of the beam, suggesting a very high power level, plus the angle of the shot which shows widebeam and off-axis firing simultaneously. 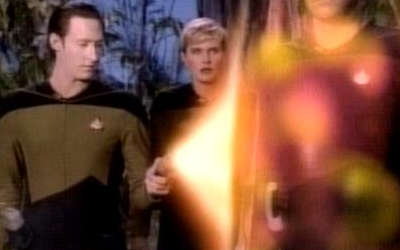 On to the later TNG-era Phasers

Back to the TNG-era Phasers Index

Back to Star Trek Ground Combat