Some have argued that the Death Star is capable of accelerations of 100g, or about 1,000m/s2. This data is based solely on the Rebel screen in the moonbase, and the presumption that it is positionally accurate.

However, the figures derived by the originator of that idea are false.

The argument that we must trust the Rebel screen over the above Imperial screen makes no sense, and ignores the canon facts. Shortly after the Death Star entered the system, we are told that the battlestation will be in firing position in 30 minutes. More importantly, we are told that the Death Star is orbiting the planet at maximum velocity, and we're shown the shot captured in the first picture above.

(The idea of maximum velocity is peculiar here, but could refer to the simple orbital trajectory, or something to do with the repulsorlifts.)

The original proponent of the 100g figure, meanwhile, shows us the Rebel screen readout at 15, 5, and 0 minutes from the Death Star's reaching of firing position. While we cannot see on this screen where the ship was located at 30 minutes out, we can certainly see that if the Rebel screen is positionally accurate, and given that the DS was already at maximum velocity, the Death Star would have been in a prime firing location 30 minutes prior, but from the other side of the planet. Further, given the max velocity line as compared to his assertion that the DS must have accelerated afterward, the proponent is asserting that they must've slowed down and then re-accelerated for no reason whatsoever.

In other words, instead of simply turning around and shooting, they made an orbit of the planet for no good reason. If they had, in fact, needed to turn around to target the moon, they could have simply dropped out of hyperspace sooner. You can see this below:

Now, I've marked with a red box the likely locations of the Death Star 30 minutes out. The green lines from the moon represent line of sight, with the green-shaded area representing partial line of sight. However, this shouldn't present a problem for the ultra-powerful Death Star, except at the farthest reaches of possible firing angles, toward the left. Also, note that I've even left a little extra room, to be conservative.

So, pick one: Either the differences between the Rebel screen and the rest of the canon facts indicates that the Rebel screen is not positionally accurate (and that therefore you cannot derive acceleration from the Rebel screen), or the Empire is utterly stupid when it comes to navigation.

I encountered someone on a forum who was partying like it was 1999, still making the claim rendered inert above.  In the process of re-reading the page and comparing against the film I noticed something was off in my screen captures above.

I will re-write the page properly when time permits, but for now I'll simply offer the correction as offered in the forum post:

As it turns out, I do have a boo-boo on that page, so it needs a rewrite, stat. I find this funny, of course, given that despite all these years and all these attempts at takedown and misrepresentation of my work, it seems it always falls to me to be the one to find a basic boo-boo. But I digress . . .

First, there are five displayed positions for the Death Star, not three, though only three are timed. Second, the 15 minute position is wrong . . . the unnamed one before it is marked as 15.

Despite the boo-boo, the Rebel screen is still not positionally accurate. For instance, upon the Death Star's arrival we see a nice wide shot of it some distance from Yavin. The Imperials note that the moon is on the far side.

It makes sense that the Imperials would know where the moon is, just from orbital mechanics and galactic record-keeping. However, it seems to me that the Rebels were unable to accurately determine the Death Star's position from behind the gas giant.

1. After R2 is plugged in, the Death Star arrives in Yavin space, with the Rebel moon on the far side of the planet which they are preparing to orbit. The world is at a good distance.

2. After the Dodonna briefing, the Death Star is very much closer to the supposedly-gassy world, and said to be orbiting the planet at maximum velocity, with the firing on the Rebel base 30 minutes away.

3. After assorted hangar scenes and fighter takeoff, Leia arrives at the command center and the Rebel 15 minute warning goes off, and the position of the Death Star on the Rebel display moves from directly opposite the planet to slightly less opposite by, say, 15-20 degrees, with no change in distance from the gas giant. That, of course, makes little sense . . . so much for positional accuracy.

4. The next scene is of the fighters approaching the Death Star transiting beside Yavin. There is a pretty obvious course change involved, given that if the fighters did not change course during the scene then the moon and Death Star already had line-of-sight. After that scene, I don't think we ever see Yavin again.

Skipping forward a bit, after Porkins dies the Imperial screen is seen with 20 on the rapidly-spinning dial, and a voice intones that it is 7 minutes until firing position.

As a Y-wing trench run is in progress, the Rebels have a five minute warning and the position of the Death Star changes slightly on the display from the last view to the one below.

After the "Evacuate" conversation, the Imperial screen is seen again and three minutes is stated.

After Red Leader is shot down, the Imperial screen is seen again and one minute is stated . . . the moon, per the screen, is now partially visible around the limb of Yavin.

A bit later, though we don't see the screen, we get a 30 second note on the Death Star.

After R2 takes fighter weapons to the face, the Death Star clears the planet. This involves a big jump on the Rebel display, and no such thing on the Imperial one.

Put simply, the Imperial screen makes more sense in context. The Death Star executed an orbit of Yavin starting at a good distance and circling gently around the limb to get a shot at the moon. 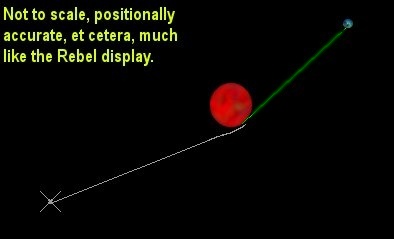 Even with the timer running funny on the Imperial screen, it still makes for a more sensical event. The Rebel screen has the Death Star executing a completely different orbital trajectory, and behaving in a much different manner.

And here is what the Rebel screen would produce if it were done in the Imperial style: 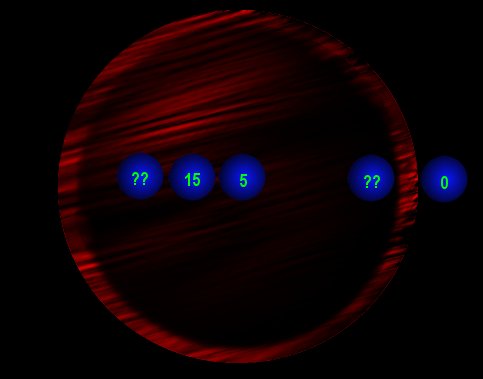 Even if my old page has errors (at least temporarily), the conclusion is still correct . . . the Rebel screen is crap for the purpose you're pressing it into.